You are here: Home1 / Communion Linens The standard size of a lavabo towel is 17″ x 11″ and is used by the priest to dry his hands before the consecration of the host at the communion service. Lavabo towels are embroidered with a cross on the center front of the towel. The lavabo towel is held by the acolyte during the service. The term “lavabo towel” comes from the Latin root, “lava,” meaning to wash.
Buy Lavabo Towel

The corporal is a large square linen usually 18″ x 18″, and is folded in thirds and placed underneath the chalice. The corporal is used to catch any crumbs from the host during consecration. Corporals are embroidered with one center front cross. The corporal is so named because the word comes from the Latin “corpus,” meaning body.

Palls are square, usually 7 x 7″, and stiffened with plexiglass for ease of laundering. Palls are often enlarged to accommodate a wide chalice. Palls are embroidered with a large center cross. Palls are placed over the chalice during communion. The function of the pall liturgical linen is to cover the Eucharistic elements during communion. The dimensions of the baptismal towel are that of the lavabo towel. However, it is embroidered with a shell and not a cross. The shell is used as the symbol of water in a baptism. Baptismal towels are often given to the parents as keepsakes. Fair linens are custom-made mass liturgical linens that cover the main altar and are embroidered with five crosses, one in each corner of the mensa and a centered embroidery. The five crosses on the fair linen are meant to depict the five wounds of Christ. A fair linen usually includes a drop, which is completely at the discretion of the altar guild. Drops on a fair linen vary enormously, but a short drop ( 4″ or less ) on a fair linen is discouraged, as the drop is not sufficient to hang properly. Longer drops on fair linens are encouraged, as they are visually more pleasing. Fair linens often include a lace trim on the drop. Fair linens should be stored rolled when not in use. The fair linen represents the shroud in which Jesus was wrapped for burial. 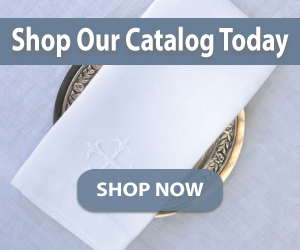